My second, intended, Forgotten Heroes [LINK] entry will be a character from the recent Powers (tv) show: Calista Secor.

Powers is an American series adaptation of the Powers comic book series published by Marvel Comics under their Icon Comics imprint.

The Powers series’ plot (from Wikipedia):
“”In a world where humans and superheroes called “Powers” co-exist, a former Power, Christian Walker, has reinvented himself as a homicide detective after his own powers were taken from him. He and his partner Deena Pilgrim work for the Powers Division of the Los Angeles Police Department, investigating crimes involving superhumans, who are at once crimefighting heroes and pop celebrities managed by specialized advertising agencies.”” 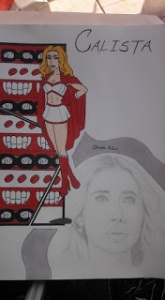 Calista Secor (series) bio:
“”Calista Secor is a “wannabe”, meaning she hangs around with powers, wanting powers of her own. She also may or may not be homeless, and is seen wandering around. Calista is convinced that she has powers that will awaken someday, and she intends to use her powers on her abusive father for hurting her mother.””

In series 2 of the program Calista is proven correct, that she does have powers. She models herself on her own Powers hero, Retro Girl.

Calista Secor (comic) bio:
“”Calista Secor is a young girl who develops a close bond with homicide detective Christian Walker when she’s placed in his temporary custody. Walker was responsible for arresting Flinch, the criminal who murdered Calista’s mother. It is believed that Calista contains the reincarnated spirit of the hero Retro Girl, making her a Power. She has demonstrated special abilities and used them to become the second Retro Girl.””

I’m hoping to recreate a miniature of the live action series Power character, as portrayed by the actress Olesya Rulin.

My third, intended, Forgotten Heroes entry will be a 1950s comic heroine.

When I first read the rules for FH I didn’t really know what character to attempt. In fact, I hadn’t the first idea. So, reading the suggestions (the Leopard of Lime Street being a BIG help), I did a Google image search and found Leopard Girl.

I’ve found a couple of short bio’s for the character:

“”Gwen was the secretary for a scientist who works in the middle of the jungle because civilization is too noisy for him. Gwen is given a mystical formfitting leopard outfit by a witchdoctor which grants her enhanced agility, knowledge of the jungle and the ability to summon leopards to aid in times of trouble.””

“”Gwen was the assistant to scientist Dr. Hans Kreitzer, who had travelled to the jungles of Africa to conduct research. Unknown to the Doctor and her fellow assistant Peter, Gwen maintained a dual identity, the Leopard Girl, feared by criminals and respected throughout the jungle by natives and animals alike. Even the jungle ghosts liked and helped her. She often worked with a pack of leopards whom she summoned and controlled with her “cry of the leopard.” “”

So those are my other two for FH. I’ve done a Google search and gone through some companies that sell superhero miniatures, but can’t find any figures of the two readily available. All that is left for me to do is put in an order for the stock models and then try to get them done before the end of the month.