I first read of the ‘Forgotten Heroes Challenge‘ on Roger Webb’s blog, Rantings From Under the Wargames Table (Well worth a read, BTW). The challenge is to make a figure of a hero, for whom there is no decent figure available. And it has to be finished in June.

As it turns out, I had a figure that fit the bill, and was done in June. It just took me this long to take a picture.

She is Distracterella, from the webcomic League of Superredundant Heroes. She is a Villainess whose power is to distract with her body. (It is revealed that the blue part of her costume is in fact body paint, and the stars are removable.)

The base figure is a female dolly from Bronze Age Miniatures. I added hair, and all else is paint.

“The calendar has been flipped from June to July, signifying that what passes for Summer here in the UK is upon us but, more importantly, that this year’s Forgotten Heroes event is over.

When I came up with this crackpot idea last year, I was

figures during the month of June. But that was last year…

The dynamic Roger Webb, who has been ably scouring the blogs of those taking part this year and reposting their ‘works in progress’ to the main Forgotten Heroes site, has also

kindly provided me with the overall stats for 2017 – this year we had 14 participants, from 7 different countries, with a total of 32 figures

created. And what creations they were! We’ve had robots, both ‘in disguise” and otherwise, Masters of the Universe, a whole slew of obscure comic book characters,

including Judges, vigilantes, patriots and cat-themed heroes, and not forgetting a certain floronic alien invader with a penchant for the odd song or two.

The enthusiasm and sheer

inventiveness of everyone who took part should be applauded, as whilst I may have come up with the initial idea, its the people taking part that make

Forgotten Heroes such a fun and memorable event. Thank you all for your participation and the support you extended to your fellow creators.

And, of course, special thanks must go to Roger for the ‘admin’ side, as without him there wouldn’t be a

central location where you can see everyone’s creations in one

Forgotten Heroes will return in 2018 and it would appear that the majority of those who took part this year are already planning NEXT year’s entries…certainly I’ve got a few ideas buzzing around in my head already.

Best wishes to you all,

(Ed note, due to the time difference between the UK and the US, Mikes post arrived within the deadline, but I was in bed at the time. I’m dedicated… but not that dedicated!)

Here are some finished shots of Acid Storm. I ended up making a Soundwave figure also. I took five bad old castings and was able to get one good figure out of the parts. I think these Transformers figures have turned out nice. I have added some custom Decals to them as well. I hope to have more pictures of them up on my Flicker account soon, till then please enjoy the photo’s below.

And one of the pair. 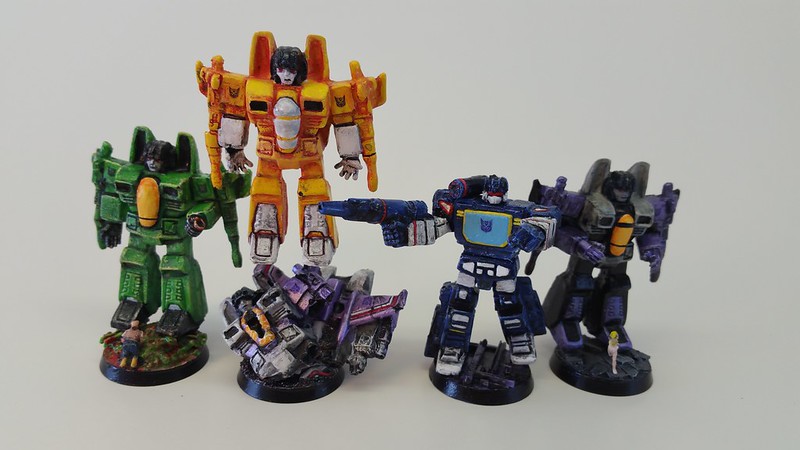