As we’re almost two-thirds of the way through June and the last three posts on the Buffet have been on other matters, you may be under the impression that my entry for Forgotten Heroes may have been…well, forgotten.

However, this is not the case, as I have been working on it behind the scenes, in amongst all the other things I’ve been up to.

When I first introduced the base model that I was planning to turn into Rom, it looked like this: 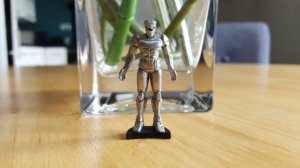 The first order of the day, in order to get Rom’s iconic spread-legged stance, which according to Messrs Keanrick and Mossop is the stance of a hero, I sliced his base in half and spread his legs. In order to do this, I did have to cut upwards, as it’s not evident from the picture, but right at the very top of his legs, they are joined by a very thin piece of plastic.

I then jammed a trangular needle file between his thighs, bent his ankles inwards and glued him to a spare HeroScape base I had knocking about. I then cut off his head and left arm.

As the base figure is looking down, when I repositioned his head to look to the left (from his point of view), there was a small wedge-shaped gap in the throat area, which I knew I would have to fill at some point.

Regarding the left arm, as I wanted to preserve the shoulder joint/pad, in order to position the arm in the right place, I needed to carve off some of the left shoulderblade/back, so that the arm would sit flush and not look too out of place. This was then glued into place and the model left to ‘set’.

Upon returning to the figure later, I discovered that whilst the glue had worked on the base, I’d forgotten that HeroScape bases have a sticker on top and this had pulled away from the plastic base beneath. So I decided to alter the stance to a slightly less heroic spread of legs and re-base it directly on to a 2 pence piece.

So, proto-Rom was now in the correct stance, but was unarmed.

Rummaging through my bits box, I eventually cobbled together his Neutraliser from various plastic odds and ends, including the remains of a plastic GW Dalek and part of a Kroot rifle.The most iconic part of his weapon is the ribbed cooling vents(?) just behind the emitter, which took a bit longer to find a suitable part.

I then cut between the figure’s index finger and thumb, prised this gap open, bent the fingers around the handle of the Neutraliser and glued everything into place, like so:

Now that proto-Rom was assembled, I needed to tidy up his base and fill the gap in his neck, or one good knock would send the head flying, so out came the Miiliput and he was given a textured base and the gap was filled. I also ran the thin edge of a needle file across his eye slot, as this wasn’t quite the right shape.

Once the Milliput was dry, the next stage was to give the whole figure a base coat. As I wanted to replicate the comic book version as much as possible, who is very shiny, I decided to use some Plastikote Chrome Effect spray on the whole figure, which is why I did not add the transparent red emitter for the Neutraliser or his visor. And this is the result:

And that’s the progress so far. Other than addiing the red emitter, visor and chest lights and repainting the base, I think he’s pretty much done.

I’m trying to decide if I should give him a black wash to highlight the shadows a bit more, or just leave him really, really shiny. I think I’ll have to look at him in full natural light to make that decision, but if anyone else wants to venture an opinion on that, please feel free to do so.