Usually around the beginning of July, once all entries for Forgotten Heroes have been submitted and the dust has settled, I provide an epilogue of sorts, giving an overview of how I thought that particular year’s event went…

I apologise for the tardiness of it, but as it was announced that the current contract I was engaged in had been cut short by six months and I would be out of work as of the 1st August, understandably my ‘free’ time has been spent trying to secure alternative (and more permanent) employment. This also explains why I’ve not commented on those blogs I regularly follow, so additional apologies for that too. I have been keeping abreast of what you’ve all been doing, just not really had the mindset to provide worthwhile comments.

So, as the third of what has now become an annual event, we’ve had an interesting project utilising some kind of alchemy in order to shrink resin models of Transformers, specifically the Insecticons (which as Tom Hanks will attest “the robot turns into a bug? That’s a great idea…”), an almost full collection of sculpted from scratch A.B.C. Warriors, a small-screen pulp flying ace and his dog, and the usual selection of four-colour heroes and villains who have been…Forgotten.

In some cases, they probably should have been, but we do love our lame and cheesy superheroes – the characters who are so bad they’re good, which is why this event is so much fun.

Now, as I hinted at previously, next year’s Forgotten Heroes will see a few changes to the rules, which I’ll explain now, but will reiterate prior to next year’s challenge.

Firstly, I’m changing the definition of a “Forgotten Hero” – this will now encompass ANY character, historical OR fictional, that has yet to have a decent figure made of them. Want to create the definitive Lord Soth from Dragonlance? Now you can. Want to do a diorama of Washington crossing the Delaware? No problem. Want to finally create either the Hypno-Hustler or Hellcow from Marvel Comics (the latter of which was referenced in Agents of S.H.I.E.L.D. season 2)? Go for it. 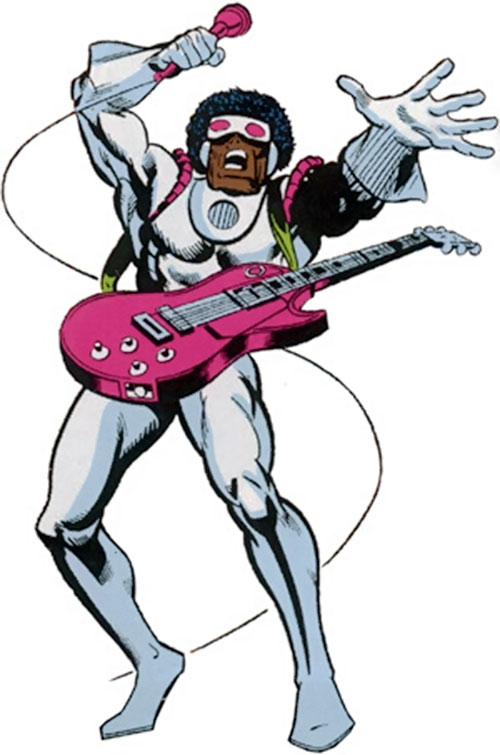 The second thing that will be changing is that you won’t be restricted to a specific scale. The figure (or figures) can be of any scale. If you fancy doing Dick Dastardly, Muttley and the Mean Machine in 20mm, so you can use with the rest of your Matchbox or Hot Wheels cars, now you can.

The other major change relates to registration. Whilst Roger administers the Forgotten Heroes site, this event was my idea and remains my baby. Roger is the Alfred to my Batman, if you like. So rather than Roger sending out emails to previous participants, in order to take part in next year’s event, you will need to register by commenting on MY blog – Carrion Crow’s Buffet – or emailing me directly. For those who have previously corresponded via Roger, he can provide this for you.

Not a particularly strenuous requirement and there will be a benefit to this, as the intention is provide ALL future participants in the Forgotten Heroes event with a badge (or button as I believe our American cousins call it) with the NEW Forgotten Heroes logo on it! Be the envy of all your friends!

Once I’ve finished designing it, that is…and no, it won’t be made from the “purest green”.

And, finances willing, there may even be some prizes too.

So, I wish to thank all of those who took part in this year in the spirit of the event and hope that you’re already planning what you’re going to do next year. If I can work out how to do it, you might even seethe Big Wheel next year… 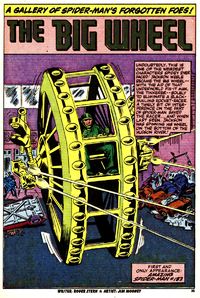 These two 37mm tall “Wizkids” models of Solomon Grundy are both miniature number 018 from the Arkham Asylum DC Comics “Heroclix” range and have been converted into members of Mister Freeze’s “Cold Pack” for this year’s annual “Forgotten Heroes” challenge. Based upon the poor unfortunate millionaires who foolishly underwent one of Victor Fries’ cryogenic treatments in an attempt to have their lifespans greatly increased, the living zombies first appeared in the February 1979 edition of “Batman” and were created by Len Wein and penciler John Calnan.
As the plastic pre-painted models originally carried a formidable-looking tree branch, they both had to momentarily suffer under the blade of a sharp modelling knife so as to appear as empty-handed as they do in the “DC Comics” publication. I then primed one with two layers of “Vallejo” USA Olive Drab and the other with Charred Brown.

The “failed experiments commanded by Freeze” subsequently had their shoes painted in “Vallejo” Black and their frozen flesh layered with Dead White. Their icy skin was later shaded using a little watered-down “Citadel” Drakenhof Nightshade and patiently dry-brushed with some (more) “Vallejo” Dead White.
I was briefly perplexed over the choice of colour for my Cold Pack members’ shirts. They were always going to be predominantly “Vallejo” Dead White, but I was somewhat worried this ‘whiteness’ might easily merge in with their pallid undead flesh if I simply washed the areas with some Pale Grey. In the end I therefore applied some Strong Tone Quickshade by “The Army Painter” over their ragged shirts, as well as more heavily across their jacket and trousers.
That’s two of my planned three ice zombies finished before the “Forgotten Heroes” deadline.
(Ed note, update added 3/7/18)
I have finished the third and final “Wizkids” model of Solomon Grundy I previously converted for this year’s annual “Forgotten Heroes” challenge. Apart from using “Vallejo” Heavy Violet and “Citadel” Leviathan Purple for his clothing, this member of Mister Freeze’s “Cold Pack” has been painted in exactly the same manner as his two peers, and should provide Victor Fries with some cryogenically-enhanced ‘muscle’. 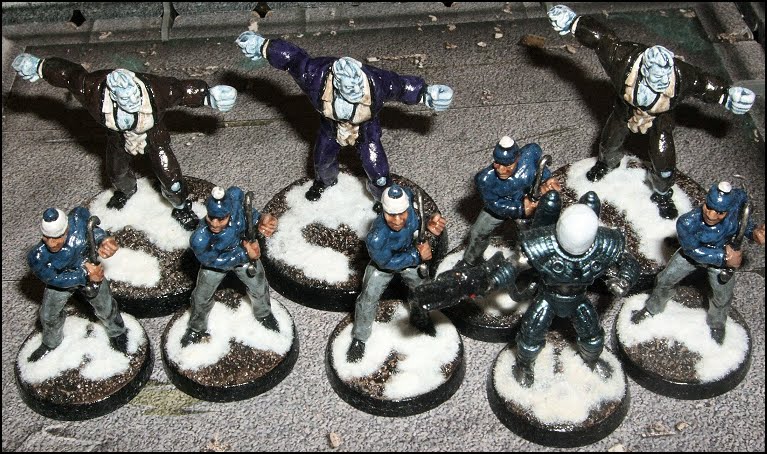