Right well as this is the end of the first sculpting week, I thought I’d go through day by day as to what I’ve achieved (or not achieved) in regards to the development of my entries for “Forgotten Heroes” month.

Sunday, and first job was to get the figures mounted up onto some two pence pieces (for non-regular readers this is how I base up all my 28mm figures these days). So beginning with Black Scorpion (or BS as I’ll call her from now on), it was a case of running her “slotta” tag along the face of my sander, as you might recall from my last post this was now bent at an angle to allow me room to add her high heels. Once I had a flat edge to glue down I mixed a little greenstuff and fixed her down. “Gangster Prankster” was a lot easier as he just needed gluing down with a spacer of card beneath his feet to give him a little extra height. Now aftershock on the other hand was a bit more awkward, as I had to add the thick soles on her boots (if you watch the film the boots she actually wears are not the stiletto heeled ones she picks out of the shop window earlier on), four tiny blobs of greenstuff were applied to the soles of her feet and then shaped into a separate stacked sole and heel on each (you watch when I “Tetrion” the bases it’ll cover all this hard work up!).

Monday was begun by gluing Aftershock onto the “tuppence”, this time with two card spacers (as she doesn’t have the “Disks” under her feet), and once dry I added the rings below her knees to represent the tops of her boots, I also added a rectangle between her breasts which will be the middle section of her “crop 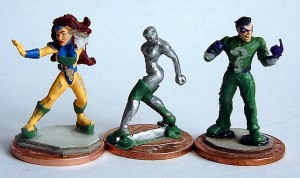 top”. BS, also had a bit of re-modelling done on her left foot to re-shape the toe of her boot, I also added the heels to these, just tiny tapered bits of putty eased into the space between her heel and the base. Next I ran sausages of putty round her thighs, then pulled these down to form the tops of here thigh length boots. The Prangster, probably had the most work done on him today, after looking again at the film (several times, in fact) I still can’t tell if his shoes are oversized or not, in the end I decided to increase their size a bit but not too much. Then wrapping his legs in putty I added the ripples and creases to what are now his suit trousers, I didn’t bother with too much detail at the top of these as they will be covered by his jacket.

Tuesday was a no-show as it was too hot and I couldn’t raise the enthusiasm to get of the tools out. So on to Wednesday and looking at the fast progress some of the people taking part had made I thought I’d better make an effort, so out came the tools and the figures and a small ball of “Greenstuff” was mixed up. I decided to start by covering up BS’s “shame” so a tapered sausage of putty was run up her front from between her legs and then smoothed out and around 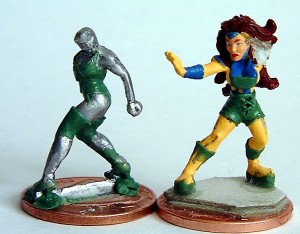 her waist up to under her breasts. A smaller piece was then added at the back and the same done there and the two halves blended together at the sides. Next I added some details to her costume, there are two small curved “tails” that curl outwards from the lower costumes “pants” area, and there is a “badge” in the middle of her chest area, so both of these were added. Turning to Aftershock, I added her “big” shorts, these were two blobs plonked onto her buttocks and another between her legs at the front that were then spread out and smoothed to shape. Then I added to tiny strips up either side of her abdomen and again these were smoothed out on the outside edges, then (and this was a right paint I tell you!) I rolled out a piece of putty as thinly as I could and cutting tiny lengths of it I added the laces at the front of her shorts, now there are a lot more of these on the proper movie version of these, but there’s enough on my model for me! I’ve got to do this again on her top yet! After this I decided I’d had enough for the day so the Prankster will have to wait till tomorrow before he moves on.

So we come to Saturday (yep I really didn’t touch these again till then!), and it was mask day as far as the two ladies go. BS, first and taking a thin sausage of putty I ran it over her nose and below her eyes, then a larger blob was applied onto her forehead and this was then smoothed out and around into the lower sausage, much “faffing” later and I just about had the shape I was after. Two tiny “spikes” were run from the bottom of her mask towards her chin, now on the original there are three of these and they are a lot smaller, but hey cut me some slack, there was no way I would even attempt those! I then took another small triangle of putty and added the forehead detail to her mask. Lastly on her I had to add some ears to the sides of her head (as the original figures were covered by 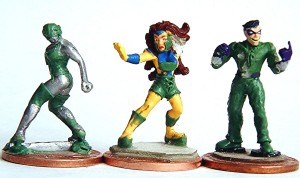 her copious hair, and thus were long gone with the file), these were a pain to get even and equally spaced on the sides of her head, remind me to do figures with their ears covered next time!). Aftershocks mask (is it a mask? It doesn’t cover much of her face) by comparison was a breeze to do, the forehead part was already done on the original “Jean Grey” miniature so a couple of small blobs shaped on her cheeks and a tiny blob on her chin and I was a happy monkey as they say. Finally this week I added the “$” symbol medallion that hangs about the Pranksters neck, this as I’m sure you can imagine started out as a small sausage of putty attached at one end to his upper chest and twisted into an “S” shape as it was pushed onto the figure, then two tiny sausages of putty were run vertically across this and again pushed into place, then two more thin sausages were run up from the top of this over his shoulders (these were not joined at the back as his jacket will cover this area.

Well, nowhere near as productive as I’d hoped, but at least I have got a bit of work done on them, I’m hoping to get all of the sculpting finished on them by next week’s post, so I can get on with the painting, but we’ll see.

Till next week Excelsior!!

2 thoughts on ““Not bad for old baldie locks! (Roger Webb)”