Week three of “Forgotten Heroes”, and as I mentioned last week, I was slow out of the blocks yet again, as Saturday I went to the Phalanx wargames show in St Helens, it’s not that far from me and they have a “Bring and Buy”, so it was a chance to off load some the excess figures and stuff that I’m never going to use again. Anyway, what you want to know is, have I finished the sculpting of Mer-man and Stratos’ and the answer is YES! I’m rather pleased about this as if I am going to have any chance of getting them finished in June I really need to start painting them ASAP. So pleased was I in fact that I have thrown another figure into the mix, but more on that at the end of this week’s posting, first here’s how I got the other two done..

Sunday, I began today by adding the rest of the feathers to Sratos’ arms in the same way as the others, I then added the back plate to

Mer-man’s arrmour, this was a triangle of putty placed on his back and the ridges were pushed into this in a shallow “V” pattern, lastly today, I started work on Mer-man’s trident, by taking a length of florists wire and wrapping it in putty, then rolling it till it was completely covered.

Monday, and very little time today, so just had time to mix up a little

ball of putty, and then after carving away some of the covering of Mer-man’s trident shaft, I added the ball near the top and then pushed two bent short lengths of wire into the sides of this as the extra “prongs”, I added a little bit of detail to the front of the balls and that was it for today, next day once it was dry I filed and sanded the back of the ball flat and reduced the thickness of the shaft a tiny bit, though not enough, so I also teased his right hand open a bit more till it fitted. Not much to show for two days work, but any progress is better than none as they say.

Wednesday, another poor day today really, I’ve been thinking about how I was going to do the “fins” on the back of Stratos’ rocket pack,

originally I was going to try and sculpt them in putty, but I decided to try making them out the end of a coffee stirrer (honestly where would wargamers be without these!). So taking one of McDonalds finest, I began by sanding the edges to make it thinner at the curved edge, then I cut the curved tip off and cut this in half. Taking these two “fin” shapes I carefully glued then in place on the back of the rocket pack, and then gently filed then slightly to shape, I think these turned out better than I could have sculpted them (and a lot thinner!).

Thursday, and today I concentrated on Mer-man’s trident so after 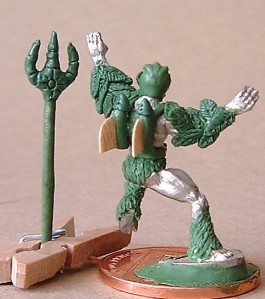 mixing up a tiny amount of putty, I began by wrapping a small amount around the central “prong” shaping it with one of my colour shapers till I was reasonably happy with the shape. I then took my small knife and cut the joint between the bones (well I think that’s what they are supposed to be anyway), some more detail shaping later and I was ready to repeat the process on the left and right prongs. After this I decided to add a little more putty to the front and back of the “head” piece of the trident, and to have another go at the design on the front, it came out better this time I think. With the small amount of putty I had left I added the two cones to the top of Stratos’ back rockets, these were just two balls shaped into cone shapes and a couple of holes were added for detail.

Friday, I finally finished the sculpting today (hooray!), they seem to have been so close for so long, I was beginning to wonder if I’d ever 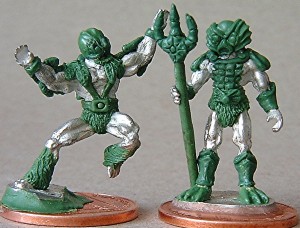 actually finish them. I began by adding the wristbands that hold Statos’ wings in place, these were just sausages of putty run around his wrists and smoothed, and he was done. Mer-man needed his fancy belt buckle adding so a tiny sausage of putty was added here and shaped into a butterfly shape before the fin details were added with my small knife, and tiny ball of putty was then pushed into the middle and will be painted as a jewel. I then carved a tiny bit away from the bottom of his trident and added a small flattened ball to this and lastly I added his wrist gauntlets these were done the same way as Stratos’ above only larger as shaped to a point at the elbow.

figure to the two above, and here it is, this is a “Firepelt Cougar” from the plastic “Dungeons and Dragons” range that I picked up from “Tritex” at Salute few years back. Now I’m hoping that a coat of green paint and some stripes, will transform him into a passible 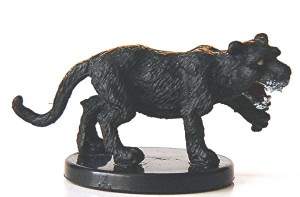 “Cringer”, a fairly simple conversion, so I hope to be able to complete all three before the end of the month.

Basing and painting next, but that will have to wait till next week, so till then…

4 thoughts on ““Wet and Windy, sorry that one was Cringeworthy” (Roger Webb)”